Six things to do now to help your plumbing system 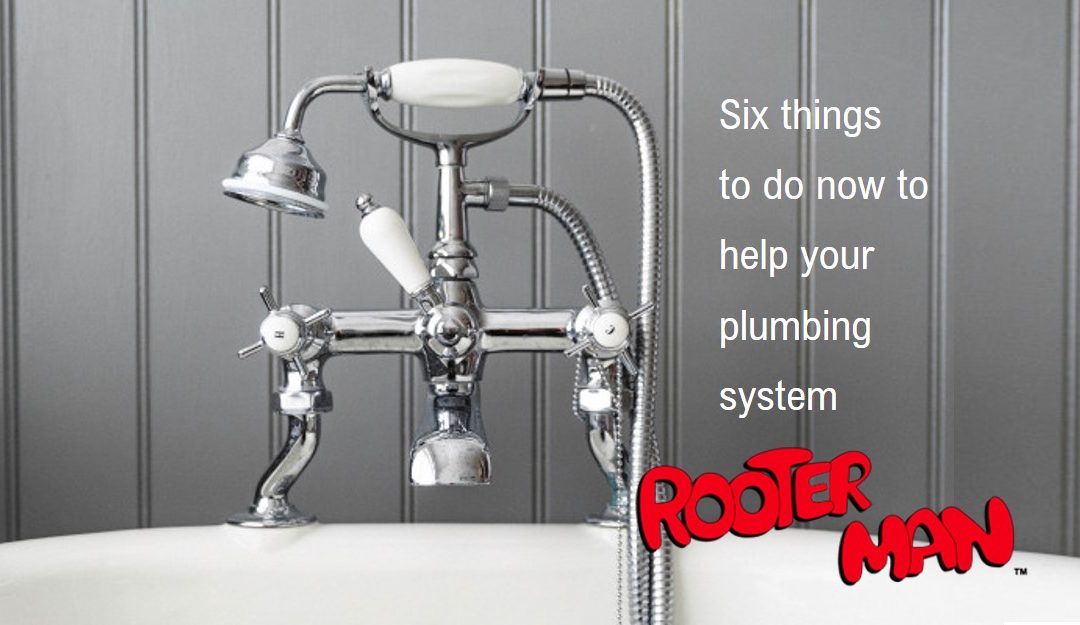 We think the saying goes…better to be prepared than with a broken pipe. May not be exact, but it is definitely true.

Most plumbing and drain lines are tucked away behind walls or in under-sink cabinets in your house, so it’s easy to forget about your home’s plumbing system – out of sight and out of mind. But your home’s  plumbing needs regular attention and maintenance to keep it working well. When plumbing problems occur, you could find yourself paying not only to replace the broken parts but also to repair water damage—and those fixes can be costly.

Over the next few weeks we will provide you some preventive measures that could help you save the headache of a water heater that produces cold showers or an undetected leak that causes structural damage.

Keep an eye out here as we give you six tips to help your plumbing system. Check back often as we add each helpful tip!

While it may not seem it now, the temperatures will drop in the Greater New Orleans area. And as temperatures drop, it is important to wrap both hot and cold water lines in insulation to keep their contents above the freezing point.

But insulating pipes have other benefits also. On hot water supply pipes, pipe insulation increases heat retention in the water, so you won’t have to wait as long when you turn on the hot water at the faucet or shower head. Insulation on cold supply lines helps avoid the condensation that can lead to freezing and possible ruptures.

Shield your pipes with products that can come from one of your local hardware and do-it-yourself improvement stores. Look for dense, six-foot-long foam rubber tubes with a slit along one side. The design makes installation simple: Just slip the slit over the pipe and the flexible tubing completely encases the pipe, protecting it from temperature changes.

Despite our best efforts, leaks happen. But if you catch them early enough, you can turn off the water and make fixes before the accumulated water causes structural damage—or worse, leads to mold and mildew growth. Installing a leak detector under sinks and near a sump pump, washer, or water heater will give you a heads-up when a leak occurs.

Today’s leak detectors can send notifications right to your phone and sound out an audible alarm whenever there is water present where it shouldn’t be. Units that include freeze detection will even alert you to the freezing that occurs before a pipe bursts.

ADD ANTI-SWEAT VALUE TO YOUR TOILET

During our humid New Orleans summers and after steamy showers, the toilet tank can often sweat. This condensation is caused by the difference between the cold water in the toilet tank and the warm air that surrounds it. Sometimes a toilet sweats so heavily that water drips from the tank and can create water puddles on the floor.

You can put an end to the drippy problem by installing an anti-sweat valve where the hot and cold lines meet. The anti-sweat valve “mixes hot water into the cold water line, providing a nice, tempered mixture into the tank of the toilet. By adjusting the valve, the homeowner can regulate the amount of hot water that enters the line. It often takes just a small amount of hot water to raise the water temperature above the dew point to stop the sweating.

Not only is the sound of water hammer loud and disruptive, but the force has also been known to break pipes and faucet components, so the problem should not be ignored.

Water hammer is caused when a faucet or valve shuts off and the water—with all its weight and momentum—slams into the closed valve. This sends a shock wave running through the pipes and causing a knocking ‘hammer’ sound.

If you discover a line that is knocking when appliances start and stop using water, install a water hammer arrestor to absorb the water shock so your pipes and faucets won’t have to take the brunt of the impact.